More Than Just Memory Loss: Not all dementia is created equal 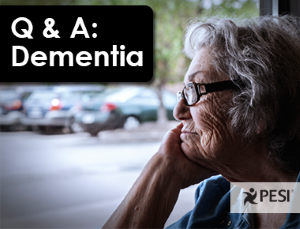 Dementia is not a specific disease. Instead, it’s a general term that describes a wide range of symptoms that affect the ABC’s of life: Activities of Daily Living (ADL’s), Behavior and Cognition. With the decline in memory, so too is there a decline in ADL’s. Behaviors are an unfortunate symptom that commonly accompanies the disease, but not all dementias are created equal. Knowing the type of dementia a patient has, can help in tailoring how the disease is treated. It also helps in understanding what types of functional or behavioral symptoms a patient may be expected to have.

Are you up-to-date with the most current dementia types? Are you familiar with what treatments may be the most effective for them? Do you know what medications are FDA approved for Alzheimer's dementia? Answer the questions below to test your knowledge base.

1. What are the medications that are FDA approved for Alzheimer’s dementia?

There are four different medications prescribed for Alzheimer’s dementia. They include:

2. Which dementia type is the most common: Alzheimer’s, Parkinson’s Disease Dementia, or Dementia with Lewy Bodies?

Alzheimer’s dementia is the most common dementia affecting about 5.3 million Americans. Age is the most common risk factor to developing this disease. Alzheimer’s currently affects approximately 1 in 9 adults aged 65 and greater, but it affects 1 in 3 adults age 85 or older. Given older adults are the fastest growing population in the country, if a cure for Alzheimer's is not found by 2050, 51% of adults aged 65 or older in the United States will have Alzheimer’s disease.

3. Do people with Parkinson’s Disease get dementia?

Approximately 20% of people with Parkinson’s Disease get dementia. It is rare for a Parkinson’s patient to get dementia. This disease is characterized by more of a movement disorder causing bradykinesia (slowness of movement), tremor, hypophonia (a weak and sometimes soft voice), a stooped posture and a mask-like face. Memory stays intact for a very long time though. Of all the dementia types, Parkinson’s Disease Dementia only accounts for approximately 5% of those with dementia.

4. Can you diagnose dementia with a memory screen?

There is no single test that is routinely done to diagnose dementia. In fact, brain biopsy is still considered the gold standard for diagnosis of Alzheimer’s Disease. However, given the likelihood of complications by such an invasive procedure, most doctors will rely on a careful medical history, a through physical exam, lab tests, possibly request imaging studies, and discuss characteristic changes in thinking as well as day-to-day functional changes that may be occurring. A cognitive screen is just one of many tests that should be done in order to rule in dementia but as a screening tool alone, a “memory test” is a poor individual tool.

5. Do patients with Dementia with Lewy Bodies oftentimes hallucinate?

Patients suspected of having Dementia with Lewy Bodies nearly always hallucinate. Those hallucinations are oftentimes vivid and real enough that even practitioners can be fooled by how true they seem. And although other dementia types can cause hallucinations too, it is one of the most distinguishing features of this disease.

6. What risk factors increase your risk of getting Alzheimer’s Dementia?

Age is the biggest risk factor for developing Alzheimer’s Dementia and although genes do play a role in this disease, it is less significant than what a lot of people realize. Research has shown us that risk factors such as: controlling hypertension and cholesterol; cardiovascular factors; exercising and not smoking; physical factors; managing cholesterol and blood sugar; and maintaining a healthy diet have been shown to be powerfully influential for PREVENTING this disease.
This blog was brought to life by PESI speaker Steven Atkinson, PA-C,  MS.

Steven Atkinson is a Board Certified Physician Assistant specializing in geriatric internal medicine. In his work with older adults, he is directly involved with the unique pharmacological challenges faced by the geriatric population on a daily basis. In addition to patient care, Steven has been an educator at the University of Utah since 1994.His published works include the book, "Geriatric Pharmacology: The Principals of Practice & Clinical Recommendations" as well as materials in several regional publications promoting mental and physical health.

If older adults are routinely under your care, minimize your risk of escalating the problems associated with troublesome, often irrational behavior by viewing Challenging Geriatric Behaviors: A comprehensive and dignified approach to care.